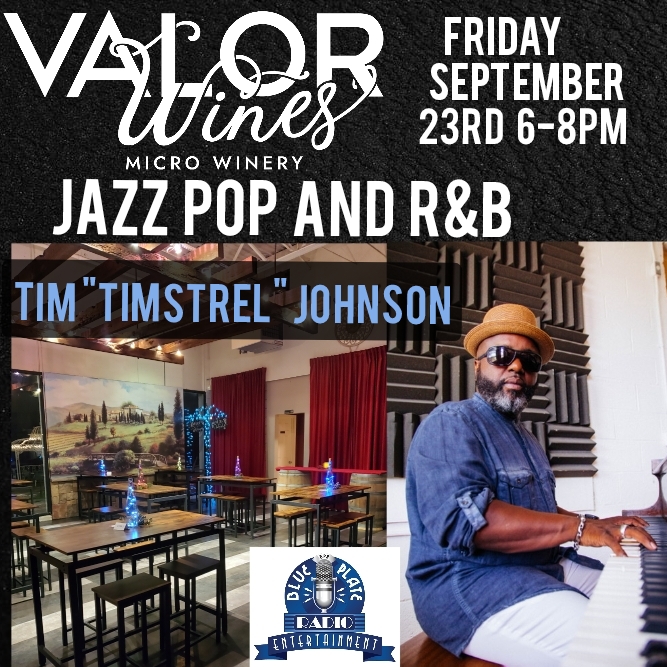 Join us Friday, September 23rd for a blend of R&B, pop, and jazz performed by Timothy “Timstrel” Johnson. The tasting room opens at 5:30 and the Music starts at 6 pm.

Timothy “Timstrel” Johnson is a vocalist, keyboardist, songwriter, and producer from West Haven, CT. Since the age of 7, Tim has played gospel, jazz, classical, pop, rock, and R&B music with many groups and combos as well as performing as a solo artist. Having traveled the world performing and recording with various artists including the late Wayman Tisdale, Sister Sledge, The Gap Band, and many others, Tim currently teaches privately and performs in the Connecticut area and abroad with many smooth jazz and R&B groups. Currently, Tim is producing a smooth jazz cd of his own after working on so many other artists’ projects.

Tim’s musical influences include Stevie Wonder, Art Tatum, Ray Charles, George Duke, Brian McKnight, and Jeff Lorber just to name a few. Tim’s style embraces easy listening and smooth jazz stylings and includes some classic rock, jazz standards, pop instrumentals, and many other styles. He has an enjoyable style and is an accomplished player as well as a vocalist.

Tim is in high demand at many venues including Foxwoods Casino and many other venues worldwide. Tim also is a music director for many live performances and musical productions. Brought to you in association with Blue Plate Radio Entertainment.