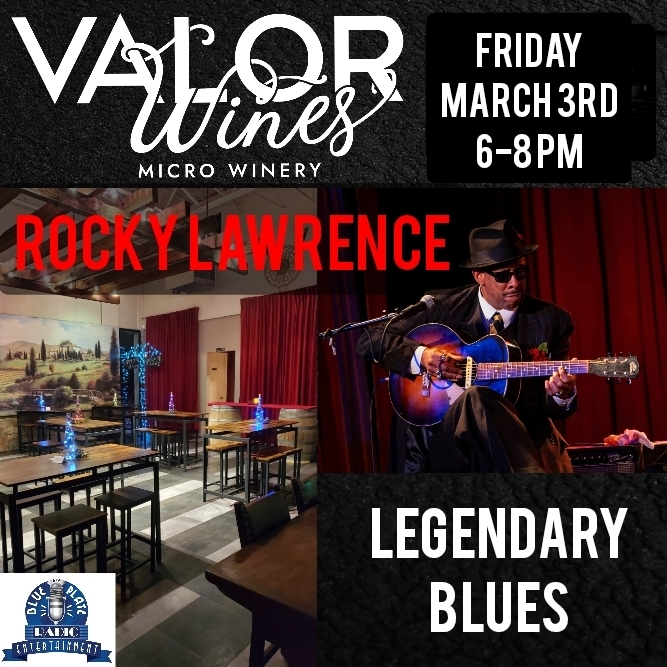 Join us Friday, March 3rd for Rocky’s Blues performance is a breath-taking don’t-miss event! So don’t! The tasting room opens at 5:30 and the Music starts at 6 pm. Brought to you in association with Blue Plate Radio Entertainment.

All roads lead to Robert Johnson. Whether you play electric and dream of Hendrix or love the acoustic alternating bass and the slide across the strings that tells every story in your life that the words you attempt to say fail, you find yourself back to Robert Johnson. Every bad date, every job you didn’t get. Every rejection letter, every bad grade, leads you back to the crossroads

Rocky Lawrence knows those stories! He is a walking persona of the country bluesman Robert Johnson. From the moment he approaches the stage sporting his matching suit, Dobbs hat, and two-toned shoes, playing a Gibson “Robert Johnson” well worn at the fingerboard, a statement of his dedication to RJ’s music and musical intensity, he plays and sings with incredible conviction. Whether he is performing solo or accompanying the masters, listeners experience a seasoned bluesman.

The sounds and emotions that Rocky Lawrence projects are the result of a musical journey that began at the age of nine. His first instrument was the trumpet. He was born in Connecticut, where he still lives today. His parents were music lovers and the sounds of Louis Armstrong and Mahalia Jackson filled their home. Louis Armstrong was his first musical hero. At eleven, Rocky fell under the spell of Jimi Hendrix and he took up the guitar. After learning “Voodoo Child, Rocky discovered that Muddy Waters’ Changes comprised the song. So began his musical sojourn going right back to the source. From Muddy Waters, Rocky became acclimated to the music of Robert Johnson and Son House.

“Robert was a good thief,” Rocky likes to say, as Robert Johnson’s style borrowed from contemporaries as diverse as Son House and Lonnie Johnson.