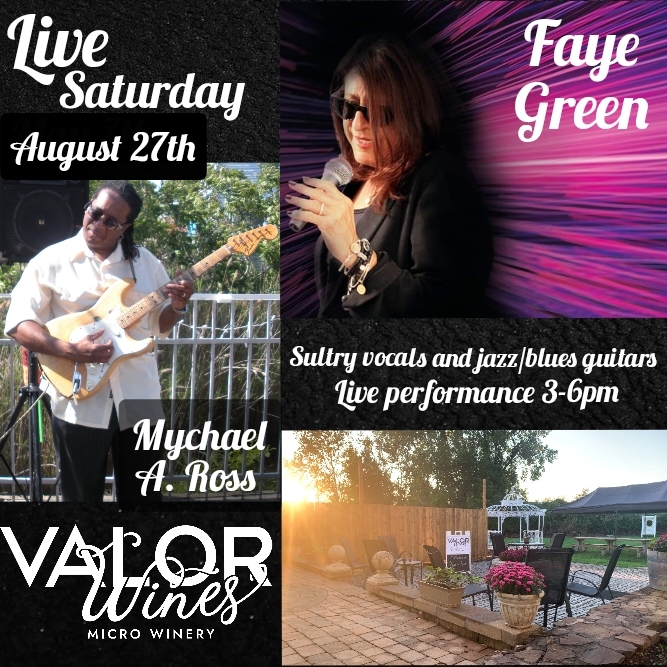 Saturday August 27th Fay Green along side Mychael A. Ross will be performing at the winery from 3-6pm.
If you don’t know already, here’s a little info on Faye and Mychael. We can’t wait to have them!
FAYE GREEN captivates audiences with sultry vocals and tireless stage energy. Her band in the 80’s, “Faye and the Funky Allstars” became legendary in Connecticut, blending jazz, blues and funk in an exciting and unique way. She has also performed with the area’s finest musicians on freelance gigs. In addition to entertaining crowds in the CT area, Faye has worked in New York City in many different venues, including the “Apollo Theater”. Faye was voted best Jazz/Blues singer three consecutive years by New Haven’s top music journal “The Advocate”. During her career, Faye spent time on the road opening for national acts such as The Average White Band, Melba Moore, Tower of Power and Tavaras and performing with artists such as Mark Egan a American Jazz Bassist known for his membership in the Pat Metheny Group and the Gil Evans Orchestra also co-founder of the jazz fusion band, Elements and the late Jaco Pastorious famous bassist who played with Weather Report and Blood Sweat and Tears.
Mychael A. Ross is one of the paramount blues /Jazz guitarists in the area!! In addition to playing with Faye he also performs with his band Le Mixx.