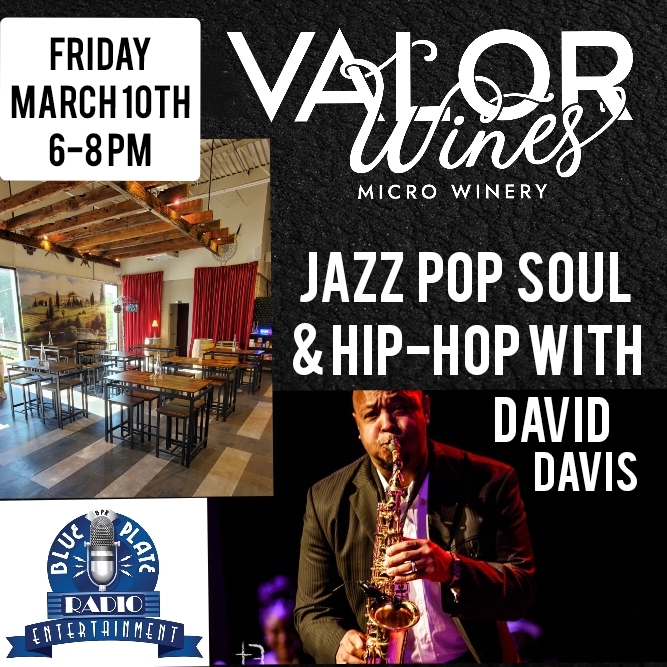 Stop in and enjoy David Davis’s saxophone performance alongside our wines and ciders from 6-8 pm Friday, March 10th! The winery opens at 5:30 pm.

David Davis is one of the most promising, young, talented, and gifted musicians today.
David was born and raised in Connecticut. He is a Hartt School Of Music graduate with
a degree in Jazz studies and Music Management. For five years he studied with and is
a protégé of the late world-renowned, professor and jazz saxophonist, Jackie Mclean.
David has performed at venues along with Mary J. Blige, Deborah Cox, LL Cool J, Brian
Mcknight, Keith Washington, Sean Puffy Combs, Kid Kapri, Biz Markie, John P. Kee,
Karen Clarke, Marion Meadows, Roy Ayers, Donald Harrison, Dave Valentine, Onaje
Allen Gumbs, Sherry Winston, Chuck Loeb, Cheryl Hayes and Gloria Lynn to name a
few. “David Davis is an outstanding Saxophonist who brings the house down with his
warm sensuous sounds”- Sherry Winston/Flying Flute Records.

David has traveled and performed in Hong Kong, Beijing during the 2008 Olympics and
Shanghai, China at some of the most prestigious venues and hotels. David’s
contemporary and Straight-ahead collections have established the Connecticut-based
musician as one of the most prominent artists. His self-produced music features him on
keyboards, Drums and Percussions, EWI (Electric Wind Instrument), drum
programming, and vocals. David has definitely earned the reputation as the “musician’s
musician.”

Whether he is playing contemporary or straight-ahead jazz, David stands in a class all
by himself. He is known for his swiftness on stage, his unique round sound which is
percussive yet soulful and his contagious smile. He has the ability to surprise the
audience with something out of the ordinary. David gives his audience what they come
for – a great show!

David has his own production and publishing company. David produces and writes
music for Hip Hop, R&B, Gospel, Jazz and Dance artists. With 9 CD’s under his belt
and many collaboration CD’s, David has definitely gained his place in the music world
as a player, songwriter and Producer.