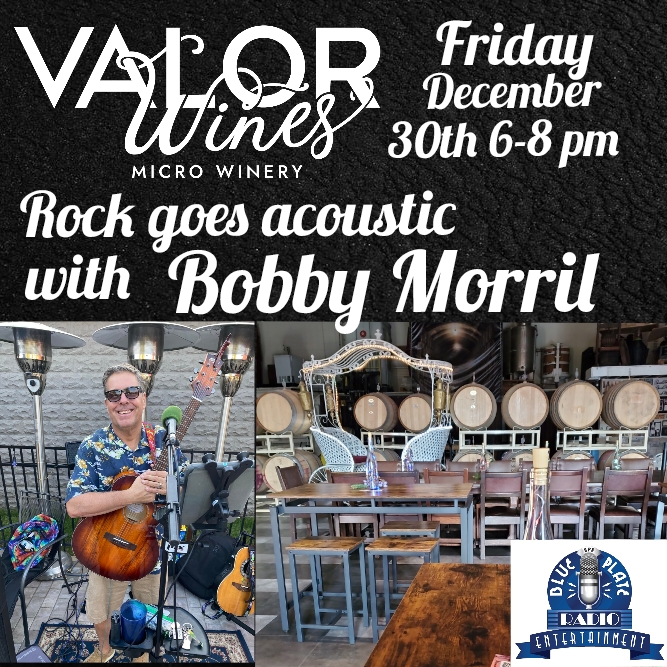 Stop in and enjoy Bobby Morrill’s acoustic rock alongside our wines and ciders from 6-8 pm Friday, December 30th! The winery opens at 5:30 pm.

Bobby Morrill may be considered a musical mercenary, but in the course of a four-hour show, he can take his audience from shamrocks to palm trees.

Morrill, a cross between Jimmy Buffett, John Denver, and Paddy Reilly musically, is an “I play what I like” kind of guy. His approach to performing is no-nonsense, but also no-holds-barred.

Self-taught on the guitar since he was a teenager, Morrill began playing bass and then acoustic guitar in high school and hit the coffee house scene as a college student in Virginia. The musical life was an ironic development for the Stratford, Connecticut-born performer, who rejected guitar lessons offered by his parents at the age of 10. Looking back, “I hated it,” Morrill says. But interest in music kicked in several years later. Morrill bought a $100 Carlos 12-string guitar and started strumming the songs of the Grateful Dead, Cat Stevens, and the Beatles.

Morrill played in “Loose Connection,” a local band in high school. He alternated between bands and his own solo act through college, playing with bands in some late-night New York City bars, honing his solo routine while living in the Florida Keys, until finding his niche in Fairfield County combining Irish music with popular party tunes. “I got into the Irish music by accident,” Morrill says. “A friend asked me if I played any Irish music, and when I said ‘No’, he said, ‘Well, learn some.'” He offered me a party gig after a St. Patrick’s Day parade. I learned four or five songs -what I thought were Irish -and then came to discover that there’s a whole other world out there in traditional Irish music.”

Today, Morrill knows about 80 Irish songs and his other repertoire is a mixed bag that covers about 350 songs. “What do I play? It’s better to ask, ‘what won’t I try to play?'” But Morrill is a fussy performer. “I don’t listen to the radio, not if I can help it. I learn about one new song a year. New music is too difficult for me.” he says, laughing. “I stick to what I like. I also love playing off the audience. If someone asks for a song, if I’ve heard it, I’ll try it.”

His style hasn’t turned off fans, who appreciate Morrill’s casual, party-style music and jump in to sing along to tunes like “Margaritaville” and even the theme from “Scooby Doo.” “I like audience participation, and on stage, the more the merrier,” he says.

Through the years, Morrill has performed with well-known Irish artists John Whelan and Tommy Makem. Earlier in his career, Morrill has been a regular artist throughout CT, RI, and MA.